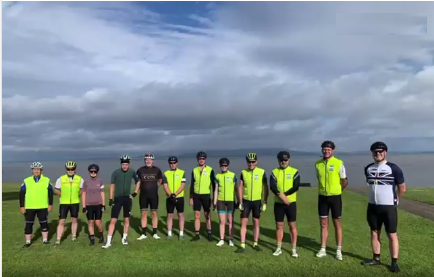 Taplanes Sales Engineer Jonathan Braunton recently took part in a charity Coast2Coast bike ride in memory of one of his friends and former colleagues from Vest Construction.

Jonathan and his fellow cyclists were hoping to raise around £5000 to help find a cure for CJD (Creutzfeld-Jakob Disease) in memory of Darren Cooke, who tragically lost his life to the sporadic version of the disease on October 27th 2020 following a diagnosis just two weeks earlier.

CJD is a rare and fatal condition that affects the brain. It is caused by an abnormal infectious protein called a prion. The prions accumulate at high levels in the brain and cause irreversible damage to nerve cells.

The effects of the prion accumulation are very rapid, only 2 months prior to his passing, Darren was cycling 70 plus miles around County Durham and the Yorkshire Dales. His passing was a massive loss and most of the people taking part in the ride knew him for 20+ years.

Darren took part in two C2C rides in the past few years over two days and his colleagues said he would have absolutely hated the idea of doing the ride in one day, so what better way to honour his memory than to take on the challenge of doing just that.

Speaking after the event, Jonathan said: “What an amazing day with such a wonderful group of people. All home safely with no major problems, not even a flat tyre. Super organisation from Lynsey Brough and Gavin Vest for such a great cause in memory of Darren. A massive thank you for the support and kind donations.”

The total raised for CJD in memory of Darren was £5445.00 and we are very proud of Jonathan and his fellow cyclists taking on the biggest cycling challenge of their lives.

This website uses cookies to improve your experience while you navigate through the website. Out of these cookies, the cookies that are categorized as necessary are stored on your browser as they are essential for the working of basic functionalities of the website. We also use third-party cookies that help us analyze and understand how you use this website. These cookies will be stored in your browser only with your consent. You also have the option to opt-out of these cookies. But opting out of some of these cookies may have an effect on your browsing experience.
Necessary Always Enabled
Necessary cookies are absolutely essential for the website to function properly. This category only includes cookies that ensures basic functionalities and security features of the website. These cookies do not store any personal information.
Non-necessary
Any cookies that may not be particularly necessary for the website to function and is used specifically to collect user personal data via analytics, ads, other embedded contents are termed as non-necessary cookies. It is mandatory to procure user consent prior to running these cookies on your website.
SAVE & ACCEPT